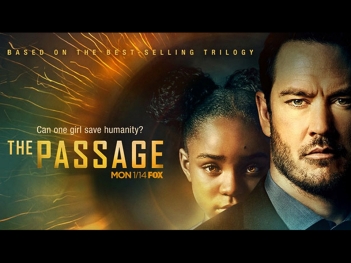 The new Fox series The Passage is a must watch! It has been a long time since a real TV show has captured my attention, but this show has me begging for more. My husband and I just binge watched the five released episodes and cannot wait for the next one! It’s a cross between The Walking Dead, The Strain, and I am Legend.

Let’s get a closer look.

IMDb: When a botched U.S. government experiment turns a group of death row inmates into highly infectious vampires, an orphan girl might be the only person able to stop the ensuing crisis.

To whomever wrote the description, summary, and tagline, it does not do it justice. We had no idea what we were getting into when we first started to watch this show as the previews were confusing and the synopsis is vague. Based on the advertisement for the series, honestly, we probably never would have watched it on our own, but thanks to my mother-in-law and the author of the book, Justin Cronin, this show is based off of, we gave it a try. So glad we did!

END_OF_DOCUMENT_TOKEN_TO_BE_REPLACED

I am finding myself more and more tired. It is taking a larger effort to get out of bed in the morning. I toss and turn no matter how long or little I have been sleeping. No matter how much time I sleep, it never seems enough. My mind races with the most random thoughts, none are coherent. I wake up looking like the walking dead.

Maybe it’s the time of year, less sunlight, more cold and dark. Maybe its my caffeine intake which I am eliminating starting today even though I have only been drinking one or two cups of coffee a day. Maybe its my sugar intake except I really haven’t eaten much of it recently, more simple carbs than chocolate. May need to cut back on bread/pasta, too. Exercise definitely needs to happen as there is slim to none in my life right now. Maybe that would make me good and tired.

All this being said, I really can’t pinpoint what is weighing on my heart and mind so heavily that sleep has become as elusive as the quest to find El Dorado. My foggy brain is hardly producing meaningful words let alone sentences.

The ultimate cure would be a lifelong vacation at the beach, but lady luck has yet to pull through with a winning lottery ticket thus far. I can only (hope to) dream.

I’m not sure what got into these writers, but all the sudden both shows have taken a turn toward amazing dialogue​. I’m jumping right in here, so consider this your warning now.

The greatest highlight in the entire Pre-Series Finale of Black Sails was Madi’s conversation with the Governor. My mouth was literally on the floor as she spelled it out for him that he was the reason Eleanor died. The dude looks like he is on the brink of losing his mind, and I literally thought he was going to go nuts right then and there. I wouldn’t have blamed him for an outburst because she literally just twisted a knife in his back that had already been making its way through his chest. It was almost poetic the way she built to the moment where she plunged the dagger into his heart. Man, I was amped during that entire exchange! Not to mention the fact that she said exactly what Flint has been saying all along to Silver. The war was about far more than her and him.

Then there was a beautiful piece by the old sailor pirate who had long past his prime, but was brought on to help Jack find Skeleton Island. He gave an incredible monologue about his time as pirate, it coming to an end and feeling like a faint memory, but the sea’scall was always there. It was outstanding and sent chills up my spine for it’s perfection and realization that all things must come to an end. Talk about gold!

Now for The Walking Dead. Sasha’s lines were still basic, but at least her scenes had meaning! It was more than just filler moments, and who are we kidding, Negan is the man! I believe this scene was exactly taken from the comics minus the fact that it was Sasha, but it’s transfer to see such basic human right being preserved in a time of chaos, again minus the knife to the neck of the would be abuser.

That about summed up the episode for me because besides getting more guns, that was about all that happened. Oh, and Dwayne showed up in Alexandria. And the Hilltop exposed the jackass in the suit for what he really was: scared peon.

Next Sunday will be no contest for me though as to which extended episode I will be watching as it is aired. Black Sails all day! I can’t see how they are going to end it in such a way that it prequels Treasure Island, but if the Series Finale is anything like this pre-finale, I know I won’t be disappointed. The Walking Dead is just going to have to wait!

What a filler episode! I mean literally, can anyone tell me exactly what happened in this episode that was any resemblance to forward motion? This episode has left us exactly where we started with the last one. I’m sorry, but it was almost a waste of time except for one redeeming factor.

I have been a fan of The Walking Dead since the beginning. Rick Grimes is my dude, and Carl is my boy. When the show first began, I was hooked hard and couldn’t wait for each episode. There have been a few very disturbing scenes as well as lackluster screen writing along the way, but ultimately, I have remained loyal to the show up until recently.

During the whole Glenn debacle, I have honestly felt a little stung by the franchise that they would treat their fans that way, but they always find a way to drag me back. Since the entire gory scene in the woods, Negan has really come into his role as the new big bad even with some not so villainy lines, and he has become the sole reason I have come back to the show following this mid-season break.

Seriously, though, these writers are not doing this series any favors right now. Did you hear some of the lines in the subject episode? CORNY! Rick gets back to Alexandria, and he and Sasha exchange like three words that are the epitome of cheesy acting. I don’t fault the actors though because I know what they are capable of, but the writings is taking a turn for the worse.

I just hope Negan sticks around long enough to carry the show for a little while. For an older than me gentleman, he is very attractive even with his cocky, domineering attitude. He is really hitting his role for me as of recently, but maybe I am just trying to fill the hole Daryl has left due to their lack of designated time to the beautiful Norman Reedus. Sigh.