Recently, I’ve been really focused on trying to get back to a healthier weight. I am sadly at a heavy weight, and I am trying to find the will I once had to get back in the diet mindset. For me, I know lower calories, lower carbs, and moderate exercise works for me, but with so much Keto diet success, I was curious.

I know Keto works for some. I’ve seen the results in multiple Facebook groups. I tried, and have found many things I love about the diet, but I also learned my body does not respond well to such low carbs. Regardless, a few months ago, I was curious. I started researching, and one of the items I wanted to try was an Egg Fast. Fasting in general is best done when you body is fat adapted, so I tried to have a complete Keto diet, keeping my macros and monitoring my calories. I did this for about a month, and thought I was ready for an egg fast.

**Disclaimer: an Egg Fast may work for others! Know your body, do your research, and consult your doctor! 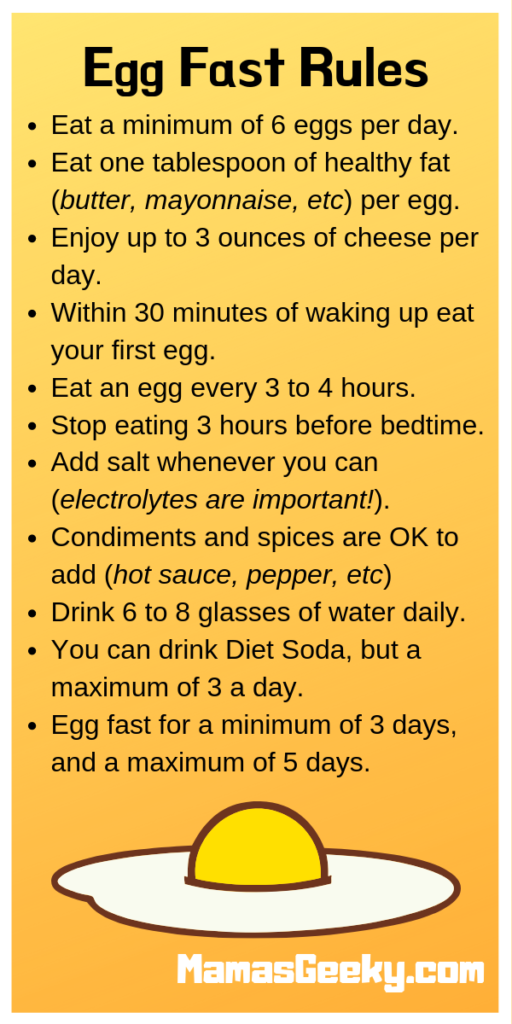 Eat your first egg 30 minutes after you wake up. It was closer to 40 minutes, but did it! Two eggs, two tablespoons of butter, salt, pepper. First meal, done!

Eat (min) 6 to (max) 12 eggs a day for (min) 3 to (max) 5 days. Eat every three-four hours. Add a tablespoon of healthy fat to every egg. Up to three ounces of cheese, all day. Add salt for electrolytes. Drink water! (RESEARCH EGG FAST!)

I thought I was ready, but I so wasn’t!

By my second egg “meal”, I had lost all color and felt ill. My family started to comment on my appearance, and my husband tried to throw crackers at me! I am no quitter, so I decided to finish out the day on the fast. I have never regretted a “diet” so much in my life. I realized right then and there, the Egg Fast was not for me, and slowly brought my body back to normal over two days with healthy shakes, chicken broth, then finally, healthy meals.

I do not recommend this fast, but again, it may work for someone else. Please learn from my lesson, though. Do your research, and know your body. I did not know my body was going to react that horribly to the Egg Fast, but now I understand. I’ll forevermore stay in my low carb lane!

I have always said that I am a gluten for punishment, and I live up to it regularly. I find new ways to add on to my plate, and eventually, I get so overloaded that I have to take a step back, regroup, and figure out how to tackle everything I promised to take on. This is definitely one of those moments. I am looking for my center then trying to add things slowly back into the mix to find the balance I lost somewhere along the way.

The good news is that I am scheduled to graduate this time next year with my Bachelor’s degree from SNHU (Southern New Hampshire University), so that will be one large chunk of weight off my shoulders. I also just finished another certification program at work, so I am officially a CAP-TA through IAAP. See a previous post for more information about them. My daughter is hinting at wanting to be potty-trained, so that will be another alleviating moment once she masters that feat. All in all, some things will be falling off my scale here shorty, so I am trying to see the finish line through the haze of the bombarding present.

Through all the chaos that seems to happening around me, I have tried multiple times to pick up the diet and workout plan I had successfully been on before I became pregnant, but to no avail. I’ve come to determine that there just isn’t enough time in the day to deal with everything I have taken on, and try to diet and exercise as heavily I had been pre baby. I don’t have time to make a breakfast or lunch, so I grab a protein shake and whatever Lean Cuisine I can find before hitting the road. I tried doing it the night before, but again, I don’t have time between dinner, bath, and bedtime routine if I want to get to bed at a decent hour and/or have some “mommy time” or pay any attention to my husband.

So I did what any mom would. I scoured the internet for what other moms do when they want to diet and exercise with a full plate of commitments. I found that you are either a “fit mom” or an “excuse mom”, and I was definitely an “excuse mom”. These type of moms are the ones that come up with a whole handful of reasons as to why they can’t lose weight or diet while the “fit moms” have ab muscles and tiny waists, and say that “excuse moms” are just lazy.

How about I’m just a mom trying to do the best I can for my child? I may not be taking care of myself as well as I should in the diet and exercise aspect, but I am filling my heart full of memories, and trying to better myself through education and hard-work in my career to provide the best life I can for my daughter. That may not make me a “fit mom”, but that sure as hell doesn’t make me an “excuse mom”, either.

I digress on my rant, but I hope I leave everyone with the idea that life comes in stages. Right now, my stage is self-enlightenment through education. Maybe as my daughter gets older and more independent, and I finally add a diet and exercise plan to my balancing act, then it will be healthier mom time. Until then, I’ll just enjoy making memories.

Oh, how busy! I swear being an adult just comes with never ending critical situations.

Tomorrow will mark a week that I have started with a dieting center called “Physicians Weight Loss Center”. I found them as part of an Amazon Local coupon, and I am now on a strict, healthy, monitored diet for a month that I swear I eat more now than I did before, but it is all healthy food!

My nutritionist, Whitney, has been great with helping me get the hang of things so far. There is so much to learn that I never realized I was doing wrong. I never really ate “bad” food, but between my sugar intake and the quantity of food within my meals, it’s becoming very easy to see why I gained the weight I did.

By no means is this an add for the company or a testimony to any results (I haven’t even had my first weigh in, yet!), but more a question, I guess.

Right now, I’m not going to lie, I could really go for some McDonald’s and Mrs. Fields cookies, but I am so excited about my potential weight loss that I refuse to dwell on those glutenous thoughts! Whitney told me that my goal is obtainable, so I cannot wait to see what will happen. I want to make sure that I give her the full month before adding any “cheating” items.

But, here’s my question.

Have you ever noticed the “Eighth Day Hump”? For those who have tried quitting something, whether a diet, quit smoking, giving up some other bad habit, didn’t you find that after that first week, the beginning of the next was just the most difficult.

As I said above, this will be my seventh day, the weigh in day tomorrow, and I am really nervous. What if after all the hard work I have put in this week, I haven’t had any results? What if after going through this first week, I haven’t made any progress? I can’t even imagine the disappointment I’ll feel if the scale doesn’t move in the right direction!

I’ve already warned my husband that he probably shouldn’t be home when I get out of the center after this weigh in depending on which way the scale tips. I’m really not sure what the results will be, but I know I do feel better. I don’t feel as bloated or fatigued (still tired, but again with the Ode to Adulthood). I’m never hungry because I eat so much good food, and I am actually starting to like figuring out ways to make my food taste good because I don’t have to eat plain anything!

I am definitely excited about this life change, but I really hope this eighth day won’t be my undoing!

I have yet to introduce parts of the reason I get out of bed each morning. (Seriously, these little guys pretty much make me!) They are the only being that I don’t have a choice in whether or not I want company wherever I go within my house. He is the only little fella that I can never be mad at and always refer to as my little guy! What’s black and white, weighs six and a half pounds, and is my personal little heater? My Chihuahua, BJ! And what is fifteen pounds, orange and brown, and all fluff? My cat, Fayeth!

Fayeth is only a year old and is part feral. I say part because she really isn’t ill tempered, just becomes aggravated if you pet her too long, like any cat would. She is a rescued kitten that was found in a bush at my husband’s grandparents house. She is a beautifully marked cat, orange, white and brown ringed, and very sweet when she wants to me. She is extremely fluffy and fluffy in another way (don’t tell her I said that!).

BJ just turned four years old and is my problem child. He is completely attached to me which I have heard most Chihuahua’s are a one person dog, and he absolutely hates my husband, but that is not where our problem lies. Our problem is that BJ has a very sensitive stomach while Fayeth will eat anything!

We wanted so badly to comfort him and figure out what was causing the issue, the vet saw us at least once a month. Finally, after tests coming back clear, we were told to change his diet. We cut out everything we were originally giving him over a span of a week or so and tried another diet, but that still didn’t work!

The vet decided the next best move would be to try a hypoallergenic diet, and finally, after a year and a half, we have success! It has been about two months now, and we haven’t had another episode. (Knock on wood!!)  The best part about it all, BJ actually really likes the food, and my steam cleaner can take a vacation!

I decided to share this story so that A. you could meet my animals, and B. if you are having the same issue with your animal, ask you vet about this option! It saved our carpets!