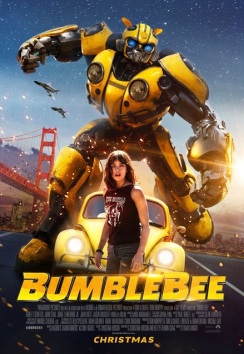 Hubby and I don’t frequent the movies often, but he loves Transformers. The new prequel came out, and he wanted to see it. I don’t mind the Transformers movies, but they just seem to get cheesier with each iteration. Hailee Steinfield is the main character, so I figured, how bad could it be?

IMDb: On the run in the year of 1987, Bumblebee finds refuge in a junkyard in a small Californian beach town. Charlie, on the cusp of turning 18 and trying to find her place in the world, discovers Bumblebee, battle-scarred and broken.

Not a horrible description, but finding refuge in a junkyard doesn’t really cover it. More like, is damaged during battle so badly, he goes into sleep mode until a young girl finds him.

Warning: may contain spoilers! You have been warned!

As you watch the first battle of Bee against humans and a Decepticon, Bee starts to experience system failures. His memory is wiped and his voice box is damaged. The last thing he sees is a VW yellow Bug. You assume he is taken to a junkyard once he is found, but the story skips ahead to Charlie finding him.

She fixes him up, but his personality is no longer Autobot warrior. It’s as if he’s reverted to childhood. He’s completely submissive, and honestly, I was kind of irritated. Bumblebee is a bad-ass in all the Transformer movies, but this one, they made him out to be weak. I get that his memory is striped and he can’t really talk, but for the love of Pete, he’s a walking robot machine, decked out with weapons!

The overall story was OK.  It was a good prequel as it did answer a few questions like what happened to Bee and why he couldn’t talk, but there was such unnecessary fluff.

Charlie’s story of losing her dad was touching, but then they threw in this whole diving aspect where she stopped diving when her father died. AT the end of the movie she dives in water to find Bee, but why she does it, I don’t understand. She can’t pull him out, so what? She went down there to see if he was alive? I don’t get the diving part of the story.

It was a little too graphic with the exploding people into plasma, but then so immature in Bee’s reverting back to childhood. I’m not sure I would let younger kids watch it, and as an adult, I’m not overly thrilled with watching it either. It was alright, I guess. *shrug*